The ELCA Southeastern Synod is pleased to name Hilton M. Austin, Jr., as the recipient of the Robert S. and Jean E. Graetz Advocacy Award.  Through his vision and tenacity, Hilton pulled together a network of advocates in the four states of the Synod, to organize the effort to be the church in the public square, and to be a voice for those who, many times, have no voice.

He tells his story on his Facebook page, of having gone through an unplanned change in his vocation, when he heard a call to open a State Public Policy Office in Atlanta.  In the first year he was able to host a gathering of other advocates in Georgia, and together, they worked on passing a Human Trafficking bill through the Georgia State Legislature.

As Hilton puts it, “The Lord said , ‘Go, be fruitful and multiply.’”  Fruitful he was. Over the past years the Synod Advocacy Council has been equipped with volunteers in Alabama, Georgia, Mississippi, and Tennessee, who work on Criminal Justice Reform, Healthcare, Immigration, LGBTQIA, Environment, and many other Social Justice issues.

Due to the cancellation of the 2020 Synod Assembly, the presentation of the award was made in a socially-distanced presentation, by Bishop Kevin L. Strickland, and Pastor Matt Steinhauer, Synod Director of Advocacy, in Atlanta on December 16.  Hilton’s wife, Patti, helped organize the surprise presentation, and there were neighbors, family and friends, who were able to be present to show their support, love, and gratitude for Hilton Austin’s good work.

In addition to the Synod Council Resolution (reprinted below), Hilton received an engraved award clock, and a cash award of $1,000, to be presented to the non-profit of his choice. Hilton chose the Georgia Interfaith Public Policy Center, which he also helped organize, and served as the Chairman of the Board of Directors, as the recipient of the $1,000.

Whereas, through his organizing and leadership the first Human Trafficking Bill was passed in the state of Georgia: and

Whereas, his tireless work for criminal justice reform and racial reconciliation continues to inspire public advocacy in others; and

Whereas, he was one of the founding organizers of the Georgia Interfaith Public Policy Center, and served as its Chair of the Board of Directors; and

Whereas, his willingness to answer God's call to “Do justice, love mercy, and walk humbly with God,” has led to engaging, and inspiring, countless others to do the same; therefore be it

RESOLVED, to award to Hilton M. Austin, Jr., the Robert S. and Jean E. Graetz Advocacy Award, in honor of his courage and faithfulness to the Gospel, in establishing a vibrant advocacy program in Georgia and the Southeastern Synod, that will continue for years to come, to provide a voice for the voiceless; and be it further

Resolved, to award Hilton M. Austin, Jr., $1,000 to be donated from the Synod to the non-profit of his choosing. 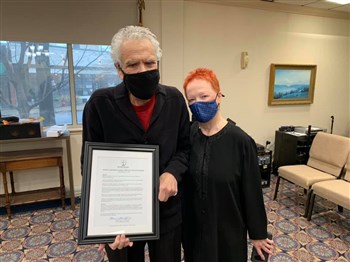 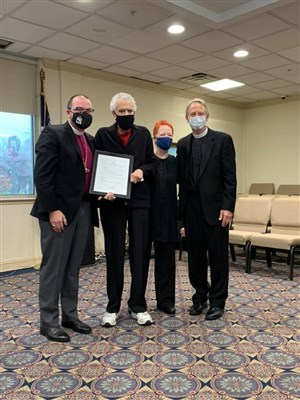